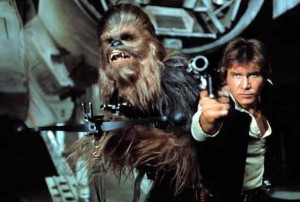 It’s been a long time since we did a proper list, so I thought it was time to break one (or a few dozen) out. As always, this list was tabulated according to a complicated set of algorithms that ranked the movies based on several factors, including: influence on the industry, ability to turn the actors involved into stars, career-making effect on the director, etc. This is not a ranking of the best movies. Nor is it a popularity contest. Titanic isn’t on the list because it was an anomaly; for all its success, it didn’t lead to a host of Titanic look-a-likes.

Without further adieu, the 11 most influential movies of the last 50 years:

Legacy: With a budget of $60,000, the theatrical release went on to gross almost 250 MILLION worldwide, making it one of the most profitable movies ever made and giving hope to every recent film grad that his or her thesis could go on to be a box office hit. Its found footage premise has become a Hollywood trope, to the point of being cliched. And that’s before mentioning how important its Internet promotional campaign was to its success. It is difficult to overestimate how important this movie was to the industry and how much it has affected the way movies are promoted.

Star Making Turns: This movie is on the list solely because of its legacy. I couldn’t name one of the principles involved, and that’s with its Wikipedia page open in another tab. I can’t be bothered to go look up a bunch of names of people who went on to amount to nothing in the industry.

Legacy: One of the greatest comedies of all time, Spinal Tap’s most salient legacy is its format. Tap was a groundbreaking example of a mockumentary, not just parodying the pomposity of rock and roll, but the documentary form itself.

Star Making Turns: Director Rob Reiner did not become a household name from Spinal Tap, but it helped launch what became a monumental career. More importantly, it was the movie that gave Christopher Guest his start.

Copycats: Best In Show, Waiting For Guffman, Borat, The Office

Legacy: Transformed the superhero movie from a campy kids genre into blockbuster material. Before Batman, the best example of a superhero movie was Superman with Christopher Reeve. Now it’s one of the most important movie genres in the industry. Plus it made boatloads of money. We wouldn’t have had The Avengers in 2012 without a successful Batman in 1989.

Legacy: One of the greatest romantic comedies of all time, it showed audiences that the genre can be smart, funny, and romantic at the same time. The diner scene is one of the most classic in the history of cinema.

Star Making Turns: Can you really believe that Rob Reiner has two movies on this list? And neither of them is The Princess Bride? This is the movie that insured Reiner will still be able to find work well into his seventies. Also, turned Meg Ryan and Billy Crystal into superstars, not to mention launched Nora Ephron’s career.

Copycats: Sleepless in Seattle, You’ve Got Mail, The Time Traveler’s Wife, Four Weddings And A Funeral

Legacy: Can you really doubt its influence? Is there a crime movie of the last 20 years that isn’t directly paying homage to Pulp Fiction? I can’t think of one.

Star Making Turns: Made Quentin Tarantino into a superstar director, and rescued the careers of not one, but two down on their luck actors (Travolta and Willis). Plus it was the coming out party for Samuel L.

Legacy: One of the greatest, most iconic movies of all time, The Godfather ushered in a new era of director-centric movies, wresting control away from the studios. Led to a wave of iconoclastic 70’s films from directors such as Martin Scorsese, Steven Spielburg, George Lucas, and Terence Malick. Created a new template for gangster movies, one that is still being followed today.

Star Making Turns: Turned Coppola into one of the all time greats, and capped the career of Marlon Brando while launching Al Pacino’s.

Star Making Turns: More important than any of the talent involved in this critically acclaimed children’s classic, the movie’s true star is the studio behind it: Pixar. No other creative group in the history of cinema can boast a comparable track record.

Copycats: Antz, Shrek, Ice Age, Kung Fu Panda, Madagascar, and every other computer animated film that has ever been made.

Legacy: More than just being one of the best sci-fi movies ever made, this was the first movie to successfully mesh CGI with fast-paced action. James Cameron, not for the first time and not for the last time, changed filmmaking forever.

Star Making Turns: Arnold was already huge, but this movie certainly didn’t hurt. James Cameron’s career became even more ascendent and it gave him the clout and finances necessary to weather all the budget concerns with Titanic. Was the highpoint of Linda Hamilton’s career.

Legacy: There was a lot of behind the scenes debating about whether to include Pretty Woman or Ghost on this list. Both came out in 1990. Both were huge hits, but Ghost made significantly more money (plus won an Oscar for Whoopi Goldberg!!!). What puts Pretty Woman over the top, and number three on our list, is that it created the template for all of the romcoms to follow.

Copycats: The Runaway Bride, 27 Dresses, Bridget Jones’ Diary, and all the other insufferable romcoms we’re routinely tortured with every year.

Legacy: This is the movie that truly ushered in the era of summer blockbusters, but the ultimate legacy of this movie isn’t the billions it made for George Lucas. This is the movie that defines franchise. Today’s studios aren’t just looking for good scripts, they are looking for properties that they can leverage across multiple platforms for years to come. Sequels, action figures, toys, television spin-offs, and amusent park rides, these are all part of the Star Wars blueprint.

Star Making Turns: George Lucas, Mark Hamill, Carrie Fisher, Harrison Ford, and everyone else associated with this movie will forever and always be known for their roles in Star Wars.

Copycats: The Fifth Element, Harry Potter, The Lord Of The Rings, Twilight

Star Making Turns: Turned Bruce Willis into such a star, that the only person who could ruin his career was Bruce Willis. And by extension, it made Keanu Reeves and Sandra Bullock into stars as well.

Killer Bunny Gets No Play